China’s BOE Display is all set to surpass Samsung Display and LG Display as the world’s largest supplier of flat panel LCD displays by the end of the year. 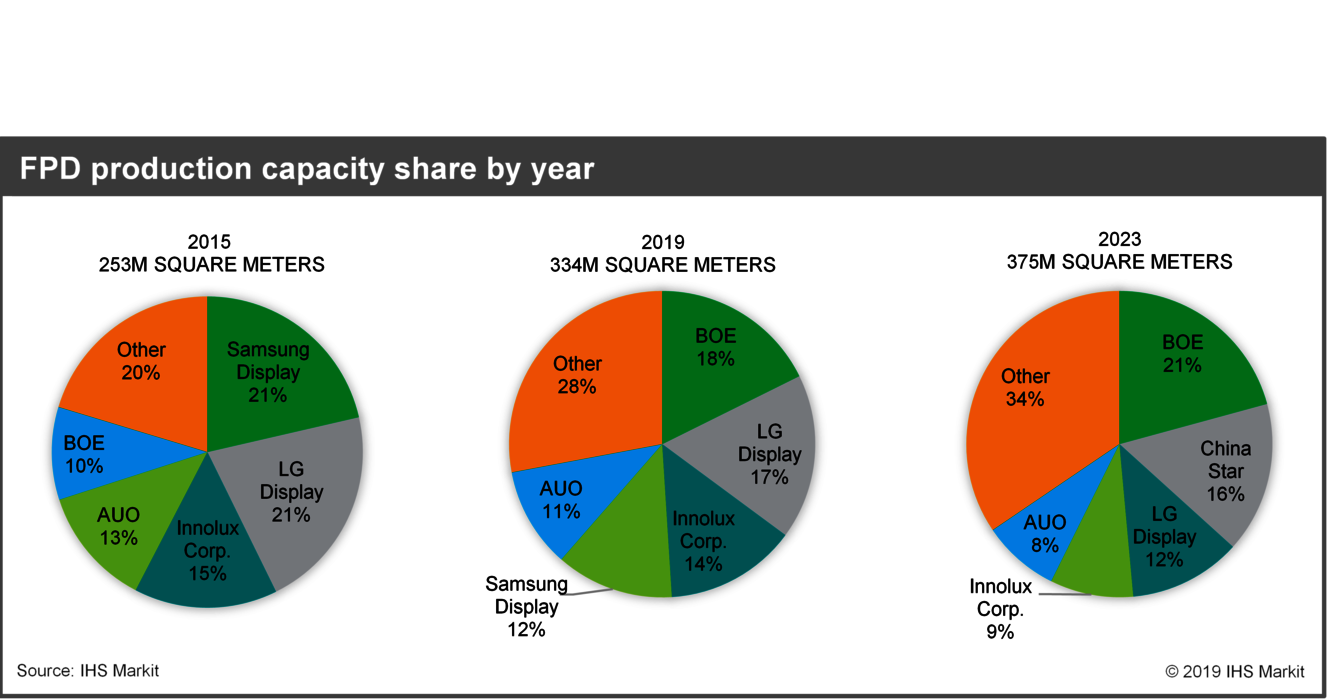 IHS Markit said BOE is ramping up the production capacity of its B9 Gen 10.5 LCD factory and its B11 Gen 6 flexible AMOLED fab to more than 59 million square metres, with those expansions set to be completed before the end of 2019. Once complete, BOE will account for 17.7% of the world’s flat panel display production capacity.

BOE’s expansion plans mean that it will surpass Korean firms’ Samsung Display and LG Display, which were the largest suppliers of flat panels with a production capacity share of 21% each in 2015. But those two companies are now prioritising their manufacturing efforts on OLED displays, giving Chinese firms room to seize leadership of the industry, IHS Markit said.

Indeed, BOE isn’t planning to rest on its laurels, as the company has further expansion plans in mind. By the end of 2023, BOE’s production capacity should grow to 78 million square metres, giving it a 21% market share.

The company has come a long way in a short time, because in 2015 its market share was just 10%, IHS Markit said.

BOE’s expansion will propel China into the number one manufacturer of flat panel displays overall, and IHS Markit says the country will account for 46% of all production capacity by the end of the year, rising to 62% in 2023. Meanwhile, South Korea and Taiwan, which cornered the market in 2011 with more than 50% of production capacity, will account for just 24% of the market by the year’s end.

In the case of Samsung and LG, this means OLED displays, where they maintain “considerable advantages” on the technology front.

For example, LG has long enjoyed its status as being the only display manufacturer that’s able to mass produce larger-sized OLED panels for TVs. Pretty much every TV brand that sells OLED models buys their panels from LG. And it’s likely that LG will retain this advantage for the next few years at least, as IHS Markit says its rivals are unlikely to be able to commercialize their own OLED production technologies until 2021 at the earliest.

Meanwhile, Samsung remains committed to manufacturing OLED displays for smaller devices, and its production will likely account for 90% of all non-TV applications this year. By comparison, BOE’s OLED displays are expected to account for less than 10% of the market this year.

In the long term though, both Samsung and LG could find their dominant positions in the OLED market under threat, IHS Markit said. By 2023, Samsung’s share of the non-TV OLED market is expected to fall to just 43%, while BOE’s share will rise to 21%, it said. And LG could suffer too, as rivals including China’s TCL and Japan’s JOLED consortium, which is made up of Japan Display, Panasonic and Sony, step up their work on the development of new OLED technologies and production methods.

BOE will also look to advance its position in the OLED industry, IHS Markit said.

“Chinese companies originally focused on assembling modules and sets, but over time they’ve climbed the display value chain to full LCD production—and now they’re aggressively pursuing OLED manufacturing,” said Charles Annis, senior director at IHS Markit. “BOE, for example, produces high volumes of almost every size and type of LCD, and is shipping millions of flexible AMOLED smartphone panels monthly from its B7 Chengdu factory. On top of that, the company is either producing or has plans to pursue alternative technologies, such as OLED on silicon, electrophoretic displays (EPDs), white OLED (WOLED) and inkjet-printed OLED TVs and augmented reality/virtual reality displays. BOE’s goal is to lead not only in display production, but also in technology.”