MicroLED is probably the most exciting new television display technology to emerge in years. And although it’s still nascent, one industry analyst is predicting that it could soon come to the forefront of the industry and perhaps even threaten the dominance of both traditional LCD and OLED technologies. 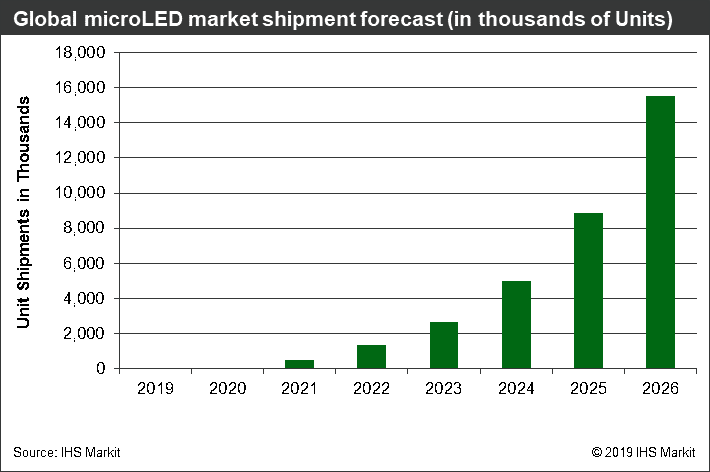 In a report published this week, IHS Markit reckons the global shipments for MicroLED TVs will rise from “negligible levels” this year to around 15.5 million units by 2026, driven by “steep declines” in manufacturing costs. The few available MicroLED TVs at present are extremely expensive, but prices should erode to the point where they’re suitable for mass market adoption within the next 6 or 7 years, the report concluded.

MicroLED, like OLED, is an emissive display technology, which means the millions of microscopic LEDs its made up of are capable of emitting their own light. This eliminates the need for a backlight, thereby making the technology much more power-efficient than traditional LCDs. Moreover, early MicroLED TVs demonstrate superior brightness and contrast levels to OLED. They’re also more durable, with a lifetime of up to 100,000 hours of use, and are also said to resistant to burn-in problems that can sometimes occur with OLED.

Even better, MicroLEDs are modular in nature, which means it’s possible to build them in any shape or size. The modular architecture also means they can be built without any bezel, as Samsung’s luxury The Wall TV demonstrates. Other advantages include being able to support any resolution, up to 8K and beyond, as the pixel density can be maintained no matter how large the screen is. They can also deliver any kind of aspect ratio you want.

The advantages are not lost on the biggest TV manufacturers. Samsung, as noted above, is already selling its first MicroLED models, and rival firms including LG and TCL are also said to be developing their own. Still, the displays are something of a rarity at present, with less than 1,000 models expected to be bought by consumers this year, IHS Markit said.

The primary reason for that is the cost of manufacturing the displays, with those prices being pushed onto consumers, but the analyst firm believes things are set to change in the next few years. It predicts costs will come down significantly to the point that the technology will be adopted not only by the TV industry, but also by makers of devices such as smartphones, smart watches and augmented-reality systems.

“Despite their extremely high price tag compared to conventional LCD and OLED panels, MicroLED displays offer advantages in brightness and energy efficiency that make them an attractive alternative for ultra-small and ultra-large applications,” said Jerry Kang, associate director at IHS Markit. “The manufacturing process for MicroLED will allow suppliers to reduce their production costs over time. Once the process matures, MicroLED sales will begin to rise.”

IHS reckons manufacturing processes for MicroLED will reach “maturity threshold” by 2024 at the latest, by which time we can expect the technology to become much more prominent.

“Despite the growth in acceptance, MicroLED shipments in 2026 will still amount to just 0.4 percent of the global flat-panel display market,” Kang said. “However, with shipments of nearly 16 million units that year, MicroLED will have entered mass-market territory, setting the stage for much wider acceptance during the following years.”