The sun seems to be setting on LCD displays, as display makers are planning to all but end their investments in the manufacturing facilities needed to produce them. 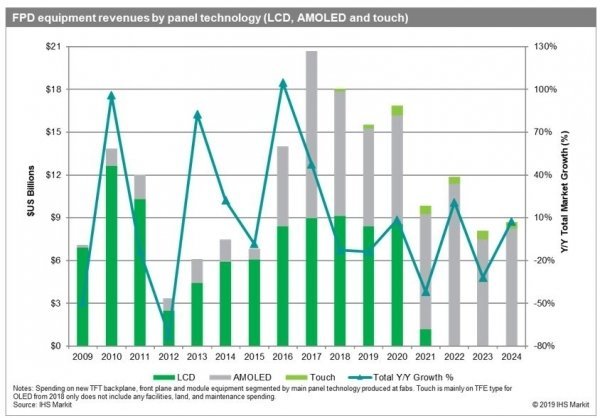 A report by market research firm IHS Markit published this week said that global corporate investment in LCD manufacturing is likely to become “obscure” by 2022, as display makers switch their attention to newer technologies such as OLED.

Those investments will mark the end of an aggressive push by Chinese display makers into LCD, which has resulted in the price of LCD display panels falling so much that better known brands such as LG Display and Samsung Display have all but given up on the technology. Earlier this year for example, LG announced plans to convert most of its existing LCD lines to OLED production in a move that’s likely to be completed next year.

And just last month, Samsung announced it will invest 13.1 trillion won (around £8.84 billion) over the next five years to adapt its LCD lines to start mass producing its new Quantum Dot-OLED displays instead. The company is also planning to build a new Q1 line that should be able to produce around 30,000 65-inch QD-OLED panels a month once it gets up and running in 2021.

Chinese companies will also switch their attention to OLED and other display technologies, IHS Markit said. They’re planning to pour up to $8 billion into OLED over the next five years, with most of that money going on “Gen-6 flexible OLEDs, Y-OCTA and TFE technology”, The Elec said. In addition, they’re also likely to increase their investments in Ink-jet printing equipment, which is said to be a more efficient method of manufacturing OLED panels.